The youngest and the oldest to become head of government 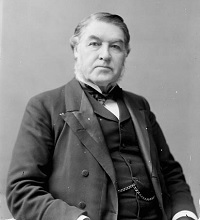 ome people make it to the top job faster than others. But Nova Scotian Sir Charles Tupper, pictured here, is likely to remain the slowest for a very long time, if not forever.

Tupper was 74 years old when he became Prime Minister of Canada on May 1, 1896. A Conservative, he lasted only two months at the job, although that was not due to his age as he died 19 years later. No, it's that a general election was held on June 23 and the comparatively youthful Wilfrid Laurier (1841–1919), a Liberal aged 54 at the time, became prime minister on July 11. At the other extreme, C. Joseph (Joe) Clark was not quite 40 years old when he was elected on June 4, 1979, to become prime minister. Interestingly, he too was a (Progressive) Conservative and had a short tenure in the office — just a few days short of nine months.

At the provincial or territorial level, George Braden and the Liberal George E. King stand out: the former became Government Leader of the Northwest Territories on June 16, 1980, aged 30 years, 7 months and 12 days, while the latter became Premier of New Brunswick on June 1, 1870, aged 30 years, 7 months and 24 days. At the opposite end we find the Liberal John H. Bell, who was 72 years old when he was elected to become Premier of Prince Edward Island on July 24, 1919.

Over nearly 60 years, New Brunswick had an almost uninterrupted cycle of electing premiers in their thirties or early fourties, although none of them came too close to breaking the provincial record held by King.

But the cycle came to a decisive end when Progressive Conservative Blaine M. Higgs took the job. Given that he was 64 years old on November 3, 2018, he holds the record for being the oldest person to become the province's premier.