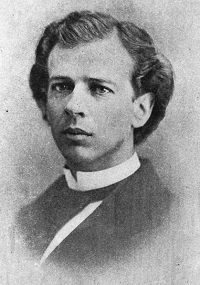 ntroducing the most elected person in Canada!

You might be thinking to yourself, "If that's the case, why have I never seen this man?" But you have, since he has been on multiple versions of the Canadian five dollar bill since 1972. You are simply not used to seeing Canada's seventh prime minister, H.C. Wilfrid Laurier (1841–1919), when he was still 22 years away from becoming the head of government. (By the way, he will be losing his place on our currency later in the 2020s.)

Indeed, this photo was taken in 1874, the year he began his first term as the federal member for Drummond—Arthabaska. From 1867 to the early 1870s, politicians were allowed to sit in both the federal and provincial legislatures in what was known as the "double mandate," but given that the practice was abolished in Québec starting in 1874, Laurier cut short his first and only term at the legislative assembly in which he represented that same riding provincially for two-and-a-half years.

He ran 21 times and won 18 of those races, but that impressive record is misleading for two reasons.

Taking into account his 7 years, 7 months and 20 days of overlaps, he served as a parliamentarian for 44 years, 11 months and 7 days, and died in office as the leader of the Official Opposition on February 17, 1919, at the age of 77.