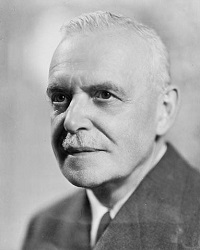 ouis St-Laurent, pictured here, is remembered more as Canada's 12th prime minister, but he finished his political career as the 19th leader of the official opposition in the House of Commons, a position he occupied for almost seven months before retiring from politics. He was 75-years-old in June 1957 when the Progressive Conservatives under John G. Diefenbaker (1895–1979) ended the Liberals' nearly 22-year hold on power, making him the oldest person to be named to that position.

Only two persons also appear on the list of the youngest premiers or prime minister: one at the federal level and the other in Québec. C. Joseph (Joe) Clark was 36-years-old when he became leader of the opposition on February 22, 1976; however, as is the case on that list, he was the oldest of the youngest, suggesting that party leaders at the federal level tend to be older than their counterparts at the provincial level. For his part, J. Robert Bourassa was the leader of the official opposition for three months before being elected to become Premier of Québec on April 29, 1970, aged 36 in both instances. Charles H. Cahan, Conservative leader of the opposition in the Nova Scotia Legislative Assembly for three years from January 2, 1891, continues to hold the record for the youngest to reach the position of opposition leader anywhere in Canada, aged 29 years and 2 months.

Just like St-Laurent, the colourful Joseph R. (Joey) Smallwood is remembered more as the first Confederation-era premier of Newfoundland, but the short-lived 35th Assembly displaced him to the position of opposition leader on February 5, 1972. Aged 71 at the time, he remains to this day the oldest to ascend (or descend?) to that position in that province. Nevertheless, one could argue that he was the first Liberal leader of the opposition of that province as well as its first premier.

Prince Edward Island Conservative Walter R. Shaw holds the record for the oldest person anywhere in Canada to become opposition leader, as he was well into his 78th year on May 30, 1966, when he lost the premiership to a 32-year-old Liberal, Alexander B.Campbell (1933– ), who, surprisingly, was not that province's youngest premier, for Liberal Louis H. Davies (1845–1924) was 31 and has held that record since 1876.

Note that the non-partisan assemblies are excluded from this list as they do not have a formal opposition.