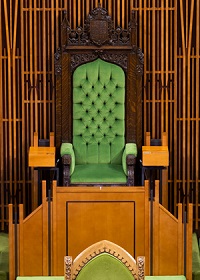 n addition to the federal Parliament in Ottawa, each province and territory has its own legislative assembly, for a total of thirteen. There is also an assembly in the autonomous region of Nunatsiavut in Newfoundland and Labrador but it is outside the scope of this database.

All assemblies are partisan except those in Nunavut and the Northwest Territories which operate a consensus form of government. That said, in those non-partisan assemblies, the individuals named in the ministerial cabinet are de facto considered forming the government while the role of the remaining members consists of holding ministers accountable, thereby serving as a form of opposition.

Elections and referendums or plebiscites held in each jurisdiction are conducted by a non-partisan agency named "Elections [Jurisdiction Name]."

In this section of this website, you can explore not only the composition of the legislatures today but also all their previous compositions from the time they joined Confederation. Occasionally, an assembly might have begun with a given party at the head of government but changed to another party due to a vote of non-confidence that occurred soon after a general election. Such a switch has not happened often — about 5.4 per 100 legislatures since 1867 — but, interestingly, it has already occurred twice in the 21st century, namely in British Columbia in 2017 and New Brunswick in 2018. The last time it happened federally was nearly a century before that, in 1926, in what became known as the King-Byng Affair, although some might say it came close to happening in 2008.

A more common situation is having a government hover between majority and minority status as a result of floor crossings or by-elections. For instance, the Progressive Conservative Party in Prince Edward Island initially formed a minority government in May 2019 but achieved majority status following a by-election in Charlottetown-Winsloe in November 2020. Also, a party might achieve a de facto majority through a confidence-and-supply agreement — a degree lower than a formal coalition — with a party holding the balance of power in the legislature, as happened in British Columbia in 2017 (between the NDP and the Greens), the Yukon in 2021 (between the Liberals and the NDP), or federally in 2022 (between the Liberals and the NDP).

The structure has been put in place to accommodate the data for the following event. It should go online one or two months before the event.