Parliamentarians who died while in office 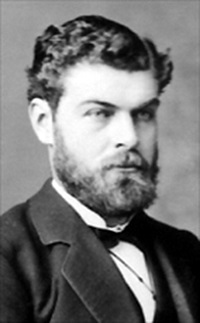 here's just something about this man's photograh that intrigued me the moment I set eyes on it.

Sure, he's a handsome dude. And he clearly wasn't old when this photo was taken. But it's... it's... it's maybe because I just caught myself referring to him as a "dude" because I could easily imagine bumping into a hipster who would look exactly like him at a Starbucks in 2022.

But it certainly wouldn't be this dude, though. He died on April 19, 1902, while sitting as one of the two MLAs for Shelburne County and (very briefly) Speaker of the Nova Scotia Legislative Assembly. His name was Thomas Robertson and he was only 49 when he died. This picture was likely taken a decade or more before that, when he was the federal MP for Shelburne.

And guess what? His co-MLA for Shelburne County, Thomas Johnson — or Johnston, depending on who you ask — also died in office about 15 months later, on July 30, 1903. Except that Johnson was 82. I have never seen a picture of that gentleman but I can imagine the contrast between the two men even though both were Liberals. And that they technically both worked until the day they died. I say "technically" because Robertson died while staying with his brother in Dell Rapids, South Dakota, "attempting to recover from an illness." That obviously didn't work out for him, poor guy.

Sorry if I sound disrecpectful, but you have to understand something: I've done so much research on all these people that I sometimes feel like I know them. Granted, because there are so many, I often struggle to remember their names. For instance, it wasn't the name "Thomas Robertson" that came to mind when I started writing this; rather, I remembered "that 19th-century could-be-a-modern-day-Starbucks-dude from Shelburne who died in office" and pulled up some Nova Scotia election results from the 1890s to recall his name.

People like him are just more memorable to me. I'm also thinking of another Nova Scotian, Yarmouth MP Bowman B. Law, who was one of the seven (and only MP) to die in the fire that destroyed much of the Canadian Parliament buildings on the night of February 3, 1916. Or E. Shaughnessy Cohen, who died in the House of Commons on December 9, 1998, seconds after she had stood to address the House. The dramatic ones have a way of standing out, of course, but that's probably because, well, death is part of everyday life and the rules — from gravity to living and dying — are no different for those who hold public office than they are for the rest of us. We simply notice more because their positions are more visible.

That being said, the fact remains that a surprising 6.75% of the 14,198 Canadian parliamentarians have died while in office, for a total of 958 in the 156 years covered by this database. However, what is perhaps more noteworthy is that it does not happen as often today. In fact, in this table, we can see that, starting at the 1975 to 1999 date range, there is a marked decline in the number of such occurrences.

You can search for the identity of the people behind these numbers...

Seeing such a sharp trend change obviously got me wondering as to why it is happening, for there are more MPs and MLAs today than there were 100 years ago. Now again, don't get me wrong! I think it's a good trend! But what could possibly explain it? We know from Statistics Canada that life expectancy of men at birth has gone from 58.8 years in 1920–22 to 79.3 years in 2009–2011, while that of women in that same time bracket has gone from 60.6 to 83.6 years, but could that be the only explanation? Are people in public office younger today? Or perhaps a combination of both?

I have the raw data; I guess I just need to come up with a way of testing those hypotheses. Any statistician or demographer out there willing to help me?